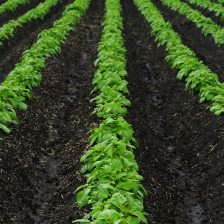 For decades the conventional thinking has been that applications of synthetic nitrogen fertilizers help enhance soil carbon levels by stimulating soil microbes to feed on organic matter from crop residues. New research indicates that, in fact, the opposite may be true.A group of scientists at University of Illinois says that research from the Morrow Plots, the oldest research plots in the country, is indicating a decline in soil carbon from the use of synthetic N fertilization.

The Way it Works

Plant residues are left behind in crop production, and various tilling and residue management methods make use of that residue as a means of adding organic matter to the soil. What we have understood about synthetic N is that the soil microorganisms are stimulated by it as an additional food source, which causes these microbes to increase their activities in breaking down plant residues and adding to the humus/carbon content of the soil. What’s being discovered now, however, is alarming.

Soil microbes degrade plant residues and reduce their carbon content and nutritional content into plant available forms and long-term fully degraded carbon, which is the backbone for forming soil humus. The other result of this microbial activity is that when microbes feed on carbon in plant residues, and as their bodies die, they release the carbon as CO2. Volatilization of this rapid cycling carbon from plants may be the larger part of what happens in this process, so as high inputs of N stimulate the microbes to feed, eventually the organic matter disappears before it can become humified. The pathway of humification is interrupted by removal and volatilization of carbon before it reaches the form of humus. “Over time, the impact of this enhanced microbial appetite outweighs the benefits of more crop residues” says Tom Philpott of Grist.org.

The last aspect of this carbon loss is explained by taking a look at carbon based organic acids in the soil: humin, humic acids and fulvic acids. Due to the acceleration of microbial oxidation of humin by N stimulation, these acids are reduced from the carbon rich humin, to the less carbon-rich humic acids, and finally to fulvic acids, which have very little carbon content. This process is natural and healthy, but when the soil is lashed with excessive amounts of N, the process is accelerated dramatically, allowing less time for new carbon inputs (from residues) and proper humification of organic matter to occur.

The net effect of this is that soil carbon levels decline, making it even more difficult for soils to store nitrogen. As the ability of the soil to store nitrogen declines, more N inputs are needed. Soil tilth, water holding capacity and nutrient retention also suffer causing compaction and leaching of nutrients. The vicious cycle is born.

Three university of Illinois professors, Richard Mulvaney, Saaed Khan and TimEllsworth have been raising some eyebrows with new data that testifies to this. In two recent papers, “The Myth of Nitrogen Fertilization for Soil Carbon Sequestration” (Khanet al 2007) and “Synthetic Nitrogen Fertilizers Deplete Soil Nitrogen: A Global Dilemma for Sustainable Cereal Production” (R.L. Mulvaney et al 2009) the researchers show that the net effect of synthetic nitrogen use is to reduce soil carbon levels. The proposed mechanism is stimulation of soil microbes by nitrogen fertilizers, causing the microbes to consume excessive amounts of organic matter.

To make matters worse, inputs of synthetic N create tough competition for nitrogen fixing bacteria populations like Rhizobium and Azospirillum. Adding synthetic N is highly stimulatory to microbes that feed on it. These microbes then outcompete the nitrogen-fixing bacteria, making N from the atmosphere even less accessible to the crop.How important are the nitrogen-fixing bacteria? According to the A&L AgronomyHandbook “It is estimated that 35,000 lbs of N are available over a single acre of land. In return for the supply of food and minerals they get from the plant, these (nitrogen-fixing)bacteria supply the plant with part of its nitrogen needs, generally not more than 50% to75% of it”.

We know that nitrogen inputs are important in crop and turf production, however we suggest that nitrogen inputs be managed much, much more carefully and recommend the use of humates to restore soil carbon in its most active form. Applications of humates will not only increase soil carbon levels, but will improve water retention, drainage, soil tilth and nutrient retention. Humates also provide a healthy substrate for beneficial soil microbes.

Research has shown that soils with less than 3% organic matter can lose 15% to 40% ofN in a growing season. Anchoring nitrogen in the soil is part of the important job of soil carbon/humus, as N binds readily with carbon-based acids such as humic and fulvic.This reduces the need for heavy, expensive inputs of N fertilizers. Moreover, the stimulation of symbiotic and free-living nitrogen-fixing bacteria by humic substances adds to availability of N from the atmosphere, supplying, in many cases, up to 75% of a crop’s needs.

By applying humates to soils where synthetic N and other fertilizers are used, we can restore soil carbon levels, balance the ratio of carbon to nitrogen and break the vicious cycle we have created in most conventional production soils. Humates are a direct input of soil organic matter, providing the most important aspect of a healthy, productive soil.