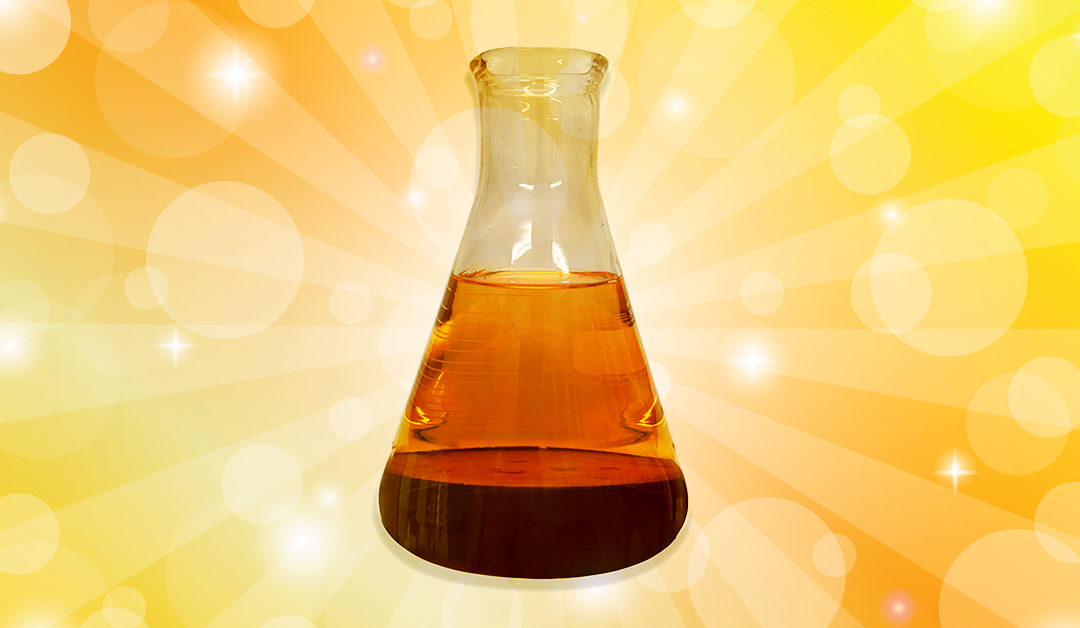 For centuries, humic acids (HA) were thought to be composed of much larger molecules than those found in fulvic acids (FA). However, the application of Fourier-transform ion cyclotron resonance mass spectrometry (FT-ICR MS), which separates molecules on the basis of molecular weight, demonstrates that the molecular weights of the two fractions both fall in the range of 200–800 Daltons (Da), with most of the molecules having molecular weights in the range of 200–400 Da (Figure 1). To give context, carbon (C) weighs 12 Da, oxygen (O) weighs 16 Da, and hydrogen (H) weighs 1 Da. Thus, phenol molecules (an aromatic organic compound, also called carbolic acid), which have 6 C, 1 O, and 11 H atoms, weigh 99 Da. 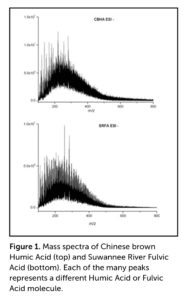 What really separates HA from FA is the lower amount of oxygen present in HA molecules (on average, 36%–40% oxygen) compared with FA molecules (on average, 48%–52% oxygen), depending on the source. In humic substances, oxygen is primarily present in the form of carboxylic acids (i.e., COOH), phenols (i.e., Ar-OH; “Ar” stands for aromatic), alcohols, and carbonyl groups (i.e., C=O). These oxygen-containing functional groups possess two important functions that greatly affect the chemical behavior of HS. These are: (1) the ability to form hydrogen bonds (for example, with H2O), which enhances their solubility, and (2) for COOH and Ar-OH the possession of negative charges when H+ is lost from the OH groups of COOH and Ar-OH. This second function is what makes HS acidic. Depending on their location on a molecule, COOH groups can lose an H+ and the O of the OH becomes negatively charged as the pH is raised from pH 1–4. The phenolic OH groups can lose an H+ and the O becomes negatively charged as pH is raised from pH 7–9.

To review, the operational definitions of HA and FA are that FA are soluble in water under all pH conditions, while HA are soluble in water only under alkaline conditions. Thus, in a strong alkaline extract, such as Huma Pro® 16 (with a pH of 11.0–12.0), both HA and FA are soluble, primarily because they become salts (e.g., potassium salts), are fully negatively charged, and the negatively charged molecules separate and repel each other. If the pH is decreased to pH 1, for example with concentrated hydrochloric acid (HCl), all the COOH and Ar-OH groups become re-protonated (i.e., an H atom is added to the negatively charged COO– and Ar-O– groups) and the HA precipitates because there are no longer any negative charges to repel HA molecules, and it is no longer water soluble.

FA molecules, which possess abundant COOH and Ar-OH, as well as other oxygen-containing functional groups, remain in solution because the presence of all these groups makes H-bonding with H2O possible. Conversely, HA molecules, which possess limited numbers of oxygen-containing functional groups that do not possess enough force via H-bonding compared with the size of the molecules to keep the molecules soluble, become more hydrophobic (i.e., H2O repelling). As a result, HA molecules start to form hydrophobic aggregates, which ultimately results in their precipitation. So, when Huma Pro® 16 is added to a highly acidic fertilizer (e.g., Super Phos®), the HA precipitates and is likely to clog spray nozzles. [See our video on Mixing Liquid Humic Acids with Agrochemicals.]

The take-home message is that HA do differ from FA, but not because of their relative molecular size. They primarily differ because FA molecules contain higher numbers of oxygen-containing functional groups, which allow them, through hydrogen bonding, to remain water soluble even at strongly acidic pH values.